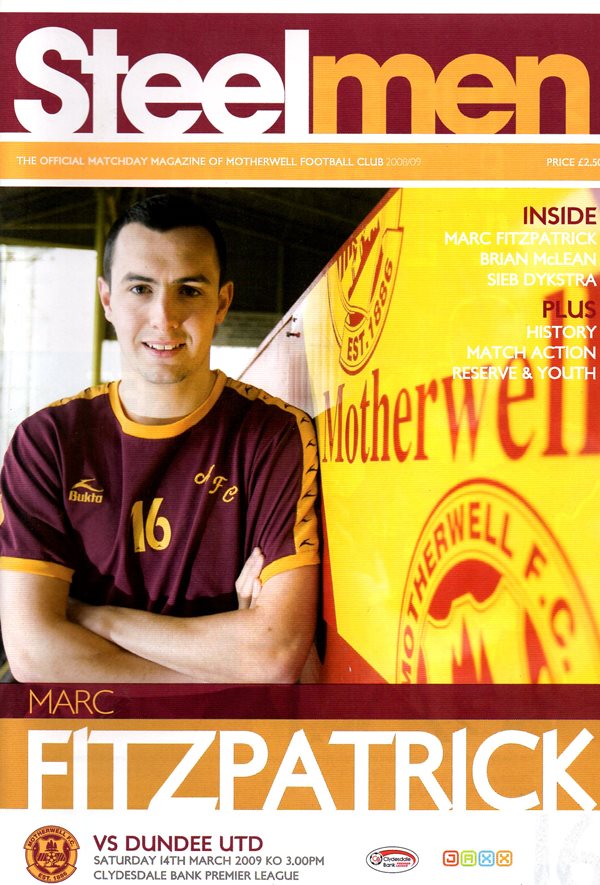 Despite difficult conditions, Motherwell and United served up an exciting encounter at Fir Park today.

However, the visitors can feel very much aggrieved that a good away performance went completely unrewarded. At key moments in the match luck was completely against them – most noticeably when Motherwell scored while United had a centre-half off the pitch, and then again just seconds after Danny Swanson was denied a penalty kick in a controversial refereeing decision.

For this important SPL encounter Motherwell restored Paul Quinn to right midfield, with Clarkson dropping to the bench. Craig Levein made four changes to the side that won at Falkirk with Feeney, Daly, Wesolowski and Kenneth all starting in place of Sandaza, Conway, D Robertson and Dods.

In a bright opening period Sutton’s chip was inches off target for the hosts before United captain Wilkie sent a header inches over the bar. Zaluska made a fine diving save to deny Sheridan on 13 minutes, then Daly was just off target for the visitors with a 20-yard drive as the game swung from end to end.

There having been little between the sides, United were unfortunate to fall behind on 27 minutes with Garry Kenneth off the pitch receiving treatment for a head wound. The re-organised defence was all at sea as Jim O’Brien crossed from the left and the unmarked Sutton added the slightest of touches to send the ball into the back of the net from close range.

United fought back but failed to draw thanks to a save from Motherwell keeper Graeme Smith. Instead, the hosts could have extended their lead, first when Quinn swung wildly at the ball with his left foot sending the ball out for a throw. Then Sheridan was played through on Zaluska. The on-loan striker seemed to get the ball stuck under his feet, his shot was half blocked by Zaluska and Garry Kenneth was able to sprint back to clear the ball from the line. And on the stroke of half time Kenneth himself was just inches over with a shot after Well failed to clear Dixon’s corner.

United came out all guns blazing in the second half with Sandaza replacing Daly and Swanson on for Buaben. Their dominance was rewarded on 51 minutes when Wilkie out-muscled Smith to a corner, Feeney knocked the ball goalwards and Sandaza prodded home from close range. The visitors survived a scare when Hammell’s corner found Reynolds who somehow deflected the ball wide from no more than five yards. But United remained on top and seemed certain to go ahead just after the hour mark. Danny Swanson struck an amazing volley from 20 yards – it appeared destined to nestle in the bottom corner but Smith pulled off a top class diving save, and Wesolowski and Caddis’s follow-up shots were blocked. Well fought back again, and McLean was just over with a header from another dangerous O’Brien corner.

With Clarkson replacing Sheridan on 69 minutes, the turning point followed just six minutes later. Danny Swanson glided past two home defenders before being chopped down just inside the penalty box. It looked a stonewall penalty kick – but the referee waved play on. O’Brien spear-headed a lighting fast counter attack to the other end which culminated with Clarkson heading into the net at the second attempt. It was not clever defending from United, but they were justifiably aggrieved not to be taking a penalty at the other end – and to rub salt into the wound Swanson was booked; either for his so-called “dive” or for dissent.

The game threatened to boil over for a while with yellow cards appearing regularly. The hosts were content to try to soak up the pressure and neither the introduction of Conway for Caddis, nor Wilkie joining the attack could quite force a clear cut chance to level again. Indeed on another counter, John Sutton should have put the points beyond doubt when played through on Zaluska – but the striker prodded wide.

Nevertheless, ‘Well held on for a vital three points keeping their top six and European ambitions very much alive.

They say these breaks even themselves out over the season. If so, United are due a huge slice of luck very soon.