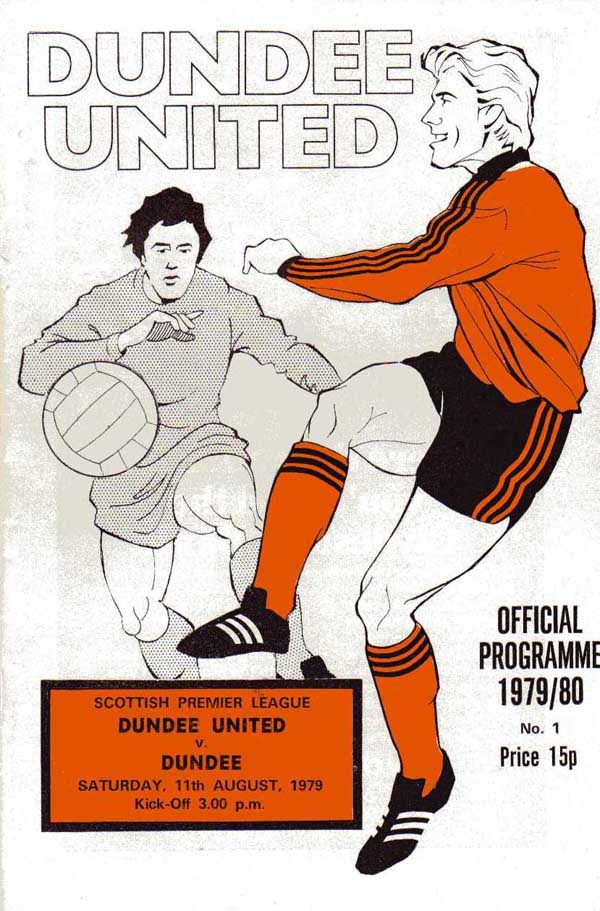 With Hamish McAlpine only just returned to the fold after his fall out with manager Jim McLean in Japan, former Chelsea and England 'keeper Peter Bonetti made his first appearance for United in the highly-charged atmosphere of the first Dundee derby in three years follwoing the Dens Park clubs return to the top flight. £100,000 signing Willie Pettigrew made his competitive debut for the Tannadice outfit, who were missing captain Paul Hegarty - who had picked up a knee injury playing for Scotland in Oslo - and John Holt; both recovering from operations. George Fleming returned to the side in place of Billy Kirkwood for this opening league game of the season.

A huge roar greeted the start and was followed by a hush when United's Derek Stark attempted a pass-back which sent the ball over his own crossbar. Bobby Glennie's effort from the corner scraped past the far post. Pettigrew had a full-blooded shot from 25 yards blocked by Glennie, and Dave Narey's first time left foot shot from 12 yards flew over the bar. Derek Addison was booked for a foul on Fletcher before Derek Stark sprinted through a wide gap in the Dundee defence to head over the bar. Pettigrew then collected a throw-in and hammered a shot which Donaldson held just under the crossbar. United took a deserved lead in the 21st minute, when Paul Sturrock tapped in after a Derek Addison corner had caused havoc in the Dundee box. Barr was booked following a foul on Payne. Dundee were struggling to get an sort of attack going and United were dominant, with Pettigrew nipping in to head down and just past the post. In the 39th minute United were awarded a penalty, when Sturrock was pulled down by Barr whilst racing into the box. Stand-in skipper Ray Stewart stepped up to take the kick, but that old United spot kick hoodoo struck again, with the ball hitting Donaldson so hard it bounced out of the penalty box. A minute later Stewart is booked for a tackle on Barr.

United started the second half with Kirkwood on for Fleming, a Dundee corner caused some panic in the United box, before Ian Redford hoisted the ball over the bar. Pettigrew's left foot effort swung past the far post, and Watson received a yellow card for a foul on Kirkwood. Dundee were starting to fight back, winning a couple of corners, and Murphy had a long range lob bounce off the top of the bar with Bonetti beaten. However, it was United who grabbed the next goal in the 69th minute. Billy Kirkwood had a shot blocked, but Dave Narey heads the ball back to the young striker to have another go and he fired into the left-hand corner well away from the helpless keeper. The unlucky Pettigrew saw his next effort well saved by Donaldson after Sturrock had outstripped the Dundee defence to send the ball through. Dundee looked to have pulled one back, but McLaren's close range header was ruled offside and the cheers quickly die. There were penalty claims at both ends, all waved away by the referee, before United scored the third goal to kill off any Dundee hopes. A Payne corner was deflected by a head to Derek Stark who crashed a volley home for a well-taken goal. A great start to the campaign by United, who's only black spot in their performance was the first half penalty miss.

Despite all the activity of late, both on and off the field, I take great pleasure in welcoming you to Tannadice for the official opening of the latest Premier League term. Like most of you United fans, I have been looking for an improvement from last season, even although it provided us with some memorable and fine team performances. Nevertheless the game is all about winning things and I feel that we made a possible step in that direction when capturing Willie Pettigrew's signature for £100,000 earlier this week. Needless to say, I will be looking to you, our fans, to aid the cause by giving the newcomer an opportunity to setde into what we hope will be similar goal - scoring form to that which brought him to the forefront during his early days with Motherwell. On a similar theme the disappointment felt by everyone concerning our former star, Andy Gray's absence from the Aston Villa ranks last week-end was topped only by the disappointment felt by Andy himself. He was so desperate to turn out in front of you, the supporters, he knows helped and encouraged his progress during his Tannadice days. Mind you, I feel sure that the side's display against Villa, and indeed against Celtic and Arbroath the previous week, made up somewhat for your disappointment.

Even in defeat at Parkhead I was very pleased with the display, and the following night at Gayfield I was truly over the moon at the performance of virtually our reserve side in beating Arbroath's full strength side by 4-2. But as far as I was concerned the best was kept for the Villa game when, honestly, I cannot remember having viewed a more enjoyable or better display since I became manager here at Tannadice. But it is down to the serious stuff again this afternoon when the first Premier League points are available. Pre-season promise means little unless it is repeated when it matters. Therefore, the unpredictability of a city derby against our Dens Park neighbours, means that we will be going out approaching the game as nothing short of a cup final. Finally, it is my sincere hope that despite the obvious rivalry between the clubs and their respective followings, the occasion will turn out to be a good arid not a bad natured one.