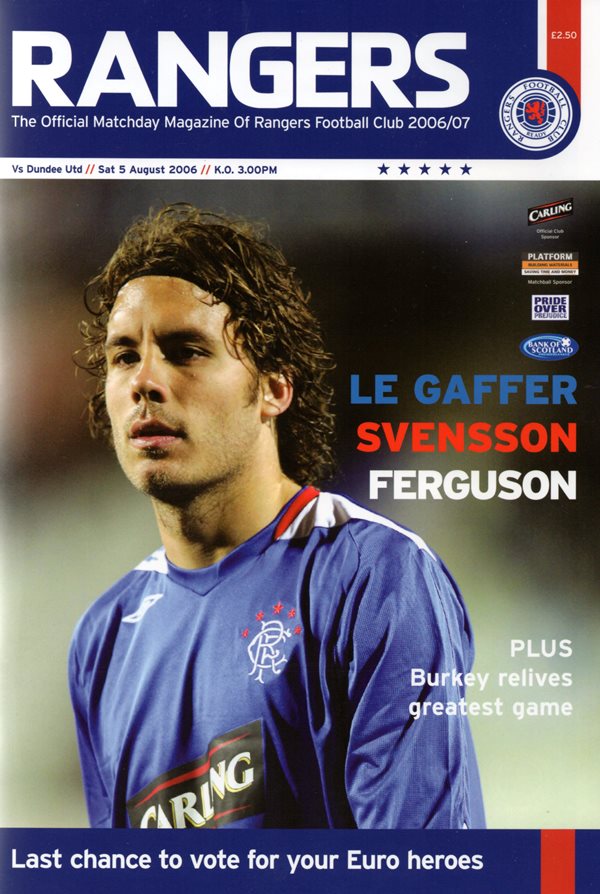 French tricolors and berets abounded at Ibrox for Paul Le Guen’s welcome party, and most Rangers fans anticipated a comfortable victory to celebrate. But nobody told United – and instead the Tangerines played the role of party-poopers to perfection.

An impressive performance at Motherwell allowed Le Guen’s starting eleven to remain unchanged, and Kris Boyd, Chris Burke and new signing Filip Sebo all had to settle for a place on the bench. In contrast, Craig Brewster rang the changes following opening day defeat to Falkirk. Christian Kalvenes made his debut at left back, Greg Cameron came in to provide support for Kerr and Duff in midfield, while Samuel and Robson played on the wings, with Noel Hunt up front on his own.

While United looked good in possession and well-organised in defence, responsibility for their half time lead lay largely with Derek Stillie, and a fair slice of good fortune. As early as the fourth minute the United keeper did well to save a Sionko volley from the edge of the box. The keeper was soon called into action again to block a close range shot from Charlie Adam, and Alan Archibald was on hand to scramble Adam’s follow-up effort off the line. United had looked good on the counter-attack with Hunt, supported by Duff, making the Rangers defence look decidedly uneasy. Nevertheless, it was still something of a shock when the Terrors took the lead on 14 minutes. Duff collected Hunt’s head flick on the left-wing, picked out the Irishman with a low cross to feet – and Hunt completed an excellent move with a superb finish on the turn, high to Letizi’s left.

Rangers continued to press forward. Stillie again denied Sionko with a superb save, Buffel putting the rebound wide. Just before the half hour mark, Sionko finally got the better of Stillie- only to see his shot hit the cross-bar and drop over. Stillie was then beaten by a Rodriguez header but Greg Cameron took his turn at clearing from his own goal, then Stillie was quickly off his line to collect at Sionko’s feet. Stillie was beaten again by a Prso header – amazingly Mark Kerr was on hand to complete a hat-trick of goal-line clearances, as United clung on to a somewhat fortuitous lead until half-time.

If United had the luck in the first half, it deserted them in the second.

Clearly frustrated by his misfiring strikers, Le Guen took introduced Boyd at the start of the second half, Charlie Adam making way. But it was United who started the second period on the attack. More fine work from Stuart Duff set Greg Cameron up – his finish had the better of Letizi, but Alan Hutton was on hand to complete the fourth goal-line clearance of the day. Hunt then played Robson through on goal, only for the winger to be denied by a last ditch tackle from Rodriguez, and from Robson’s corner Letizi did well to tip McCracken’s header over the bar. Robson tried again, and this time his corner was converted by the onrushing Christian Kalvenes, to cap an excellent first game in Tangerine. United two up with thirty-five minutes remaining.

Three points looked on their way to Tannadice but Le Guen had other plans, and before the game had restarted Burke replaced the nervy-looking Svensson. With virtually his first touch of the ball the young Ranger’s winger threw Rangers a life-line, curling a fine shot from the edge of the box into the bottom corner of Stillie’s net. An hour in, and Dado Prso almost capitalized on some confusion in the United defence, then Boyd failed to connect properly a few minutes later, with the goal gaping. Filip Sebo entered the fray for his Rangers debut, but as the clock ticked away United looked increasingly confident at the back.

Just as it seemed as though Rangers were running out of ideas, disaster struck as another substitute scored with virtually his first touch of the ball – this time into the wrong net. With eleven minutes left, Steven Smith’s long punt didn’t seem to pose any danger for United – but a terrible misunderstanding meant Steven Robb’s back header from 20 yards sped past Derek Stillie, who had strayed from his goal line. Buffel and Sionko had chances as Rangers tried to finish the comeback, but United defended solidly to see out the last ten minutes.

United will be frustrated to have drawn from two ahead, but overall the result was fair, and a point most welcome. And importantly – the performance was a vast improvement on last week’s capitulation to Falkirk.