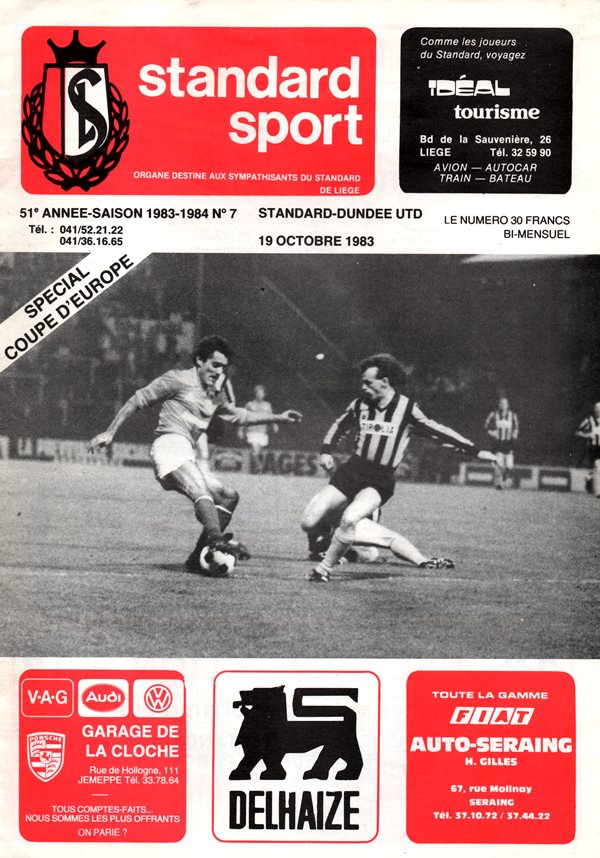 United’s status as dark horses amongst the elite company of the European Cup would be tested against opponents who would see themselves in a similar light. The Belgian champions, Standard Liege, who had enjoyed a more than comfortable passage through the first round, defeating Ireland’s Athlone Town 11-4, also had bragging rights going into the tie, having knocked United out of the first round of the UEFA Cup by a solitary goal in 1978. Several players across both sides were involved in the 1978 tie, but Paul Sturrock, who played in both games, was still absent from the United line-up this evening. Jim McLean decided to lean on his more experienced bodies, bringing Derek Stark back into his starting eleven at the expense of John Reilly, allowing McLean to move Billy Kirkwood further forward to support Davie Dodds. For the hosts, Walter Meeums and Michel Wintacq had played for Belgium in the 1-1 draw with Scotland last week at Hampden Park and West German internationalist Horst Hrubesch would start up front.

The early exchanges were fairly cautious, with United looking comfortable on the ball, the only fright coming after a couple of minutes when Davie Narey’s was a little light on the pass back to his ‘keeper, Hamish McAlpine, and the United number one had to be spritely to claim the ball before Hrubesch on the edge of the box. United’s plan was to attack Standard down either wing and Ralph Milne created their first chance when he drove at the left back and floated a perfect cross to the far post where Dodds had found space between the two centre backs and tried to prod the ball past Michel Preud’homme but it drifted just over the bar. Milne again was key, when a spell of possession saw United move the ball from their left to the right and Milne sent in the cross, with Dodds and Eammon Bannon free at the far side, but it came off the top of the cross bar and went out of play. Standard were struggling to contain Milne in the first half, and with his quick feet, he wriggled clear of the attention of four markers and squared the ball for Kirkwood, whose shot was blocked. Moments later, John Holt squeezed a pass through the centre backs which Milne couldn’t quite reach and the clearance fell to Bannon, who with Preud’Homme out of his goal attempted to curl the ball into the empty net from 25 yards out, but the effort was a touch too high. The Belgian’s were struggling to create any meaningful opportunities. The Dutch right winger, Simon Tahamata, was their focal point, but Maurice Malpas was playing him superbly. The game was drifting to half-time when for the first time in the match Standard put together a move of real quality. Gerrard Plessers broke through the middle and slipped Heinz Grundel in behind Narey and Malpas. McAlpine raced out to narrow the angle and Grundel shot early but Paul Hegarty had raced back to cover and cleared the ball off the line.

The second half was if anything, slightly lower key than the first. Standard’s possession was limited to the area in front of United’s extremely disciplined back four and Hrubesch was limited to competing for high balls, which was food and drink to Hegarty. The attacking football once again came down United’s wings with both Bannon and Milne getting in behind their full backs, but unable to quite deliver the final ball that could present a chance for an away goal. Standard created one more genuine opportunity when once again Plessers set up Grundel, who cut in from the left and shot quickly from the edge of the box but his low drive went just past McAlpine’s left post. As the game approached full-time, United nearly clinched a winner when Bannon, winning a header on the edge of his own box, ran the length of the park, to cross only for a Standard deflection to take the ball away from Kirkwood at the far post with the goal waiting.

In a competition with Liverpool, Hamburg and Roma, United’s outsider status is perhaps understandable, but equally, this was their 49th game in Europe, and it showed. Content to rely on the defensive rigour of their back four, supported superbly by Holt and Derek Stark in central midfield, United kept Standard at arms length, using the pace of Bannon and Milne on the break. It was a performance of seasoned European campaigners, who knew exactly what was required to secure a superb result away from home. Although Jim McLean would never say as much, he must be licking his lips at the thought of what his United team will be able to do to this Standard side when the hand break is off at Tannadice in a fortnight. Qualification for the quarter-finals is very much attainable and the attention across the continent that will bring.