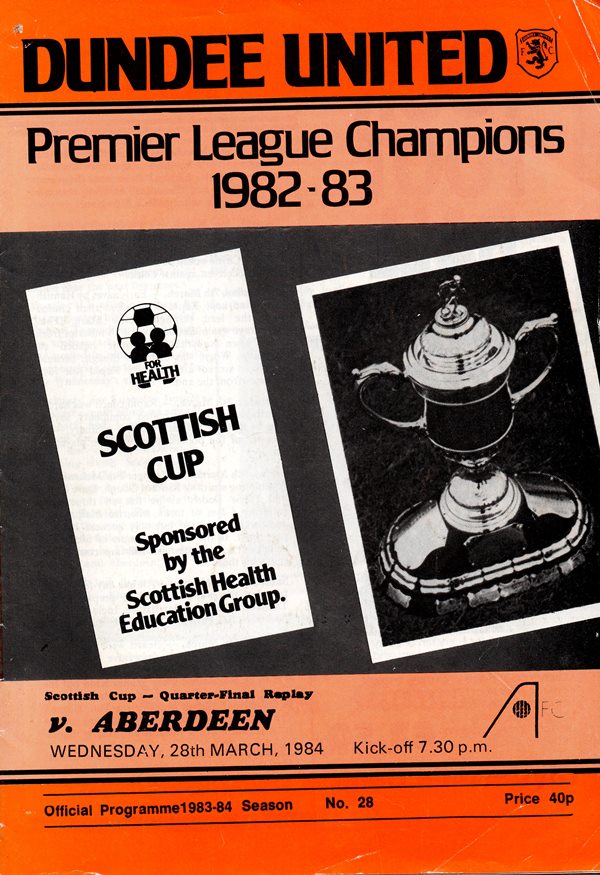 The Dons make it eight Scottish ties without defeat against United. Off to a bad start as McAlpine's poor clearance falls to Angus who plays McGhee in and he slams home from 18 yards. United sweat blood, but lack a cutting edge. Angus, Simpson and McGhee all receive cautions.

Last week provided, without any shadow of a doubt, one of the greatest nights in Dundee United's history when we overcame Rapid to reach the last four of Europe's Premier Tournament, where we now face A.S. Roma. It is absolutely unbelievable that so few players have achieved so much. Also I think this further success is richly deserved reward for the players continued dedication over the past few years. Equally, it is a fitting tribute for the supporters of Dundee United. Here at Tannadice, quite against the modern trend, our support has swelled in numbers and that vocal backing was instrumental in last Wednesday's victory. Obviously, our European success required a team effort on and off the park and I am extremely pleased for eveiyone connected with the club — Directors, Coaching Staff, Scouts, Office and Ground Staff — have been able to share in this remarkable achievement for a provincial club. League Secretary, Jim Farry, is perhaps the only person with a sore head. following the further progression in Europe, for both ourselves and Aberdeen. That and last Saturday's postponement has only only heightened the existing fixture chaos and my hope is that this is made even worse by both clubs going on to reach their respective finals.

Given the financial advantage that both the "Old Firm" and Aberdeen hold over us, I am convinced no set of players anywhere have worked harder than those at Tannadice to attain our current prominence. I doubt if anybody in Scottish football begrudges Dundee United our latest European success, and I would like to thank everyone who sent messages of congratulations. It would be remiss of us not to extend our congratulations to Aberdeen. Alex Ferguson's side earned a magnificent victory against Ujpest Dozsa, and I, for one, think it is just reward for a great club. I would like to add my best wishes and see no reason why, with the very strong pool at Plttodrie, they can't repeat last season's Cup Winners Cup triumph, when they served Scottish football so well. In saying that, I hope Aberdeen reserve all their good luck for Europe, because I am looking for all the breaks to go against them in the two domestic competitions that still have to be decided. Following last Saturday's highly unfortunate postponement, we still have to face Aberdeen twice in the League and, of course, tonight's prize is a semi-final meeting with Dundee in the Scottish Cup. This is a tournament that has eluded us up until now, providing an added incentive, if that were necessaiy, to achieve our first cup victory over the men from Pittodrie.