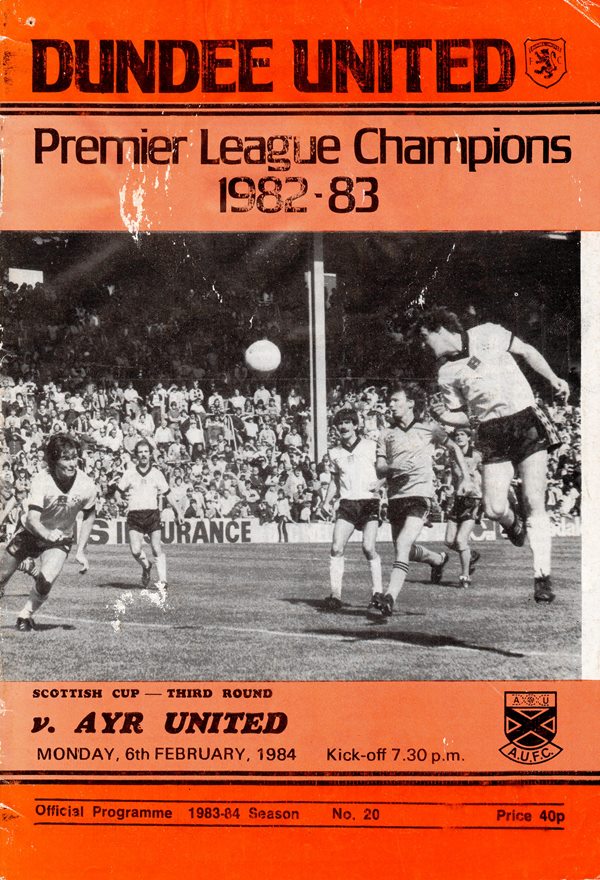 First Division Ayr United and a snow covered Tannadice surface combined to keep a rusty United at bay for most of the match. Indeed time appeared to be running out for the Tangerines when substitute John Reilly sent over a hanging cross. Davie Dodds and 'keeper Jim Brown both went for it and Paul Sturrock was lying handy to squeeze the ball over the line for his first goal of the season.

Although Ayr looked dangerous on the break they rarely troubled Hamish McAlpine and their best chance fell to striker Alan Mclnally but he shot past in the 25th minute. Before Paul Sturrock's highly welcome intervention United's most threatening raid came after only eight minutes when Davie Dodds hit the bar. The reward for victory was a home tie with Hearts.

This being our first home game of 1984, may I (belatedly), wish everyone a Happy and Prosperous New Year. Our minimum aim for the forthcoming year is to clinch at least one major honour to follow up last season's success, and the Scottish Cup of course provides one such avenue. One of our biggest problems this term has been our home form, even although six out of our last eight outings have been away from home, we have only been beaten once on opponents territory as opposed to three reversals at Tannadice. Even the manner of our two most recent victories over Motherwell and St Johnstone wasn't entirely satisfactory. In fact, since we beat Standard Liege in November, the attitude displayed by the players has been disappointing. An element of staleness has crept in and as a consequence we now face a difficult task to retain our title. I, too, probably must shoulder some responsibility, by not taking enough chances with my team selections. Complacency amongst the first team will only be eliminated by the fear of losing their place for a spell, not just one game.

Having said that, the players perhaps deserve more credit than has been given for what they achieved this season without the services of Paul Sturrock — our main front player. After the Motherwell game, I really felt Paul was on the way back, but at Perth, there was a set back in his return to full sharpness. A top form Paul Sturrock in the ranks is essential when we still have so much to play for this season. I was happy with the performance of Dave Beaumont in an unaccustomed midfield role at Perth. He has had only a handful of reserve appearances in that position, consequently I am left with the problem of whether to grant him an extended run in the first team without midfield experience. However, Dave does look to shoot from midfield and that is exactly what we require. Jnfortunately it is for that reason that John Holt has not figiired in the last two starting elevens. John has probably been our most consistent midfielder this term, but unfortunately we have an abundance of defensive midfield players and John's lack of goals has been the reason for his recent absences, something I feel guilty about in view of his consistency this term. The recent adverse weather has caused considerable frustration, not only due to the lack of match practice, but also the unavdla. bility of suitable outdoor training facilities. All in all, the backlog of fixtures will ensure matches twice weekly for the remaiiider of the season, and that is a situation I hope will persist, as it will mean our continued interest in three cup competitions, commencing with this Scottish Cup tie against Ayr United.