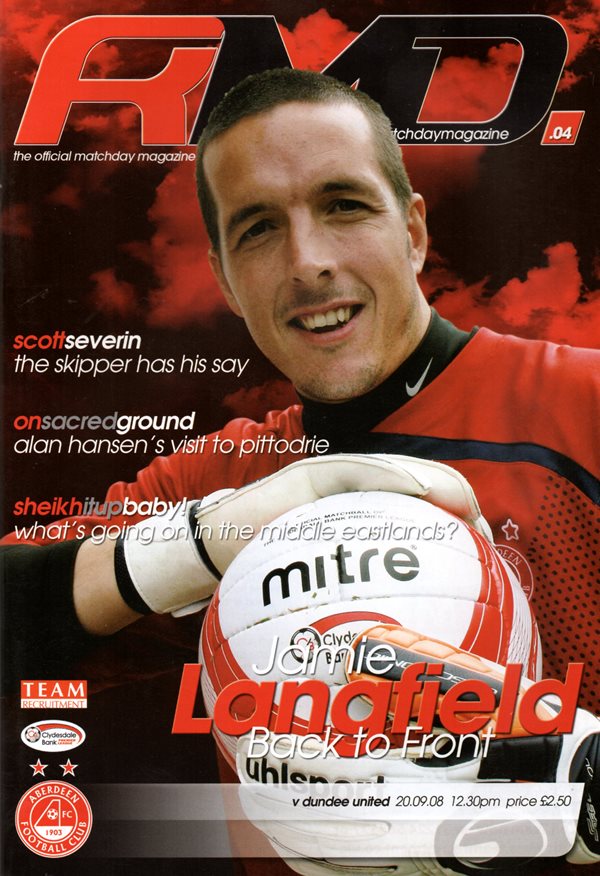 After a blistering opening fifteen minutes in which both sides went full pelt for the opener, the game petered out towards half-time stalemate.

Immediately after the restart, however, United went one up after Tommy Wright conceded a penalty for a blatant handball that left Dons boss Jimmy Calderwood seething on the touchline. Sandaza made no mistake in converting the penalty, sending Jamie Langfield the wrong way as he slotted the ball home from 12 yards.

In a fraught opening forty-five, the home side were the first to conjure up a threat on goal, when Gary McDonald fired over after just six minutes. Lee Miller whipped a 25 yard free-kick towards goal, but it deflected off the wall and into the path of McDonald who blazed his chance over the bar from close range.

As the game raced from end to end in the early stages, United almost responded immediately when Scott Robertson fed the ball into the path of Craig Conway down the left flank. His curling cross was met by a sliding Jon Daly, but he couldn’t steer his effort on target.

Aberdeen could have snatched the lead on the stroke of half-time when Chris Maguire forced an excellent save out of Zaluska. Sean Dillon slid in to scramble the ball clear, but it fell to McDonald inside the box, who again failed to find the target.

Sandaza broke away after the restart, firing towards the Aberdeen goal and forcing a decent save out of Langfield. And it was from the resultant corner that United won the penalty to go one up.

United could have grabbed a spectacular second just moments later, when Sandaza’s cross was met by an acrobatic effort from Jon Daly. But the Irishman’s bicycle kick was wide of the mark.

Wright had an opportunity to redeem himself for conceding the spot-kick when the ball fell to him ten minutes later, but couldn’t find the target with his shot from inside the box.

Aberdeen lay siege to the United goal for long spells in the closing stages, but were unable to forge a real test for Zaluska.

McDonald, having had two chances in the first half, was again given two opportunities to equalize for the home side. But his 81st minute drive lacked any real venom and was easily collected by Zaluska, while his last-gasp stoppage time effort was, again, blazed over the bar, enabling United to hold on for a confidence-boosting first win of the season.